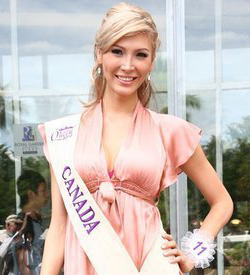 There’s been much talk in the news recently about Jenna Talackova, a 23 year-old woman who was disqualified from the Miss Universe Canada Pageant after officials found out that she wasn’t a “naturally born female”.

Jenna Talackova always knew she was in the wrong body, even at a young age. At the age of 19, after taking hormone therapy for a number of years, she underwent transgender surgery where physicians removed her male genitalia and converted it to female. She’s had other surgeries to make her look more female as well, such as breast implantation and removal of her Adam’s apple. The question that remains is whether or not Jenna is really any different from other contestants or young women who have had enhancements such as these. My answer is no.

After reading her story it’s clear to me that Jenna truly knew who she was on the inside, but couldn’t be herself on the outside until starting hormone therapy at the age of 14. I admire her vigor and would never have guessed that she was originally born a male. Her yearbook pictures from middle school have a feminine look about them and I mistook her for being a girl even before her surgical procedures.

Jenna was disqualified to compete in this year’s Miss Universe Pageant, which is run and owned by Donald Trump. However, she worked with her lawyers to have the committee members of the pageant change the official rulings so that she would able to compete. She has all the legal documentation that states she is a female, and Canada (her birth country) recognizes her as a female, so why shouldn’t she be able to compete? The rules and policies have now been resolved by the pageant’s committee members and Jenna will be able to compete when the pageant begins on May 19th.

Jenna is not only a female; she’s an advocate for other women who have experienced discrimination as transgender females. She’s working hard to pave the way so that more women will feel comfortable enough to fight for themselves and stand up for who they truly are. We’re all our own best advocates and I think that Jenna is making true strides; not only for herself, but for the transgender community as well.