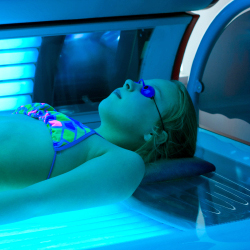 It’s more than clear that tanning can lead to skin cancer. However, just like with other things that teens are told not to do, they do it anyway. I don’t think teens do this to be rebels; I just think they want to look good (according to the media’s standards). According to Telegram & Gazzette, a New England newspaper, indoor tanning rates were higher among young white women. It’s ironic, because decades ago being white was better, but now being tanned is what’s in.

For the most part, I think that teens like to fit in with the new trends. A lot of shows popular among teens, such as Jersey Shore, depict tanning as the cool thing to do. Honestly, I’m naturally tanned. I’ve obviously tanned while walking or at the beach, but it has never been my main purpose. I do have many light-skinned friends who hate being “pale”, as they call it, and go tanning especially when they know they’ll be going somewhere or will be taking pictures for a special occasion. One of my friends told me she’s going to go tanning once a week, every week, for the next couple of weeks. I asked her why and she said because she didn’t want to be pale. Tanning isn’t cheap, but she told me the cost didn’t matter to her and I’m sure many other teens agree with that.

According to the same article, in the previous year, over half of US adults younger than 30 have gotten sunburn. That doesn’t surprise me at all. I have way too many friends that like to go tanning and I hear about them going to tanning salons frequently. So obviously, if you go tanning a lot, you’re going to get a burn, which increases your risk of getting skin cancer.

It’s been proven that tanning booths are just as dangerous as direct sunlight and both can cause skin cancer. Teens don’t really pay much attention to this, because it’s not a consequence that they see right away. The article (mentioned previously) stated that the sunburn you get at 18 can cause the skin cancer you get at age 40. It’s uncommon for teens to think 22 years into the future, which is why it’s unlikely that they’ll stop getting inside a tanning booth or laying out in the sun without sunscreen. Teens tend to live in the moment – and living in the moment means not thinking about their life in 2, 3, or 22 years. For some teen girls it means staying on top of fashion, and following trends. Right now tanning is considered a dangerous trend, but it’s clearly a popular one.

My advice to you is to stop tanning! Being tanned for a couple of days isn’t worth dealing with skin cancer or dying from it later. Love the skin you’re in – avoid indoor tanning and when you’re outside use a sunscreen with a minimum of 30SPF, and reapply it frequently. Finally, try to avoid the sun between 10 a.m. and 4 p.m when the sun is the strongest.