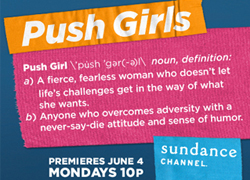 Have you seen the new reality show on the Sundance channel called “Push Girls”? It premiered on June 4th, and tells the real story about the lives of four women living in LA who met after they became paralyzed. Three of the young women are paraplegics (paralyzed from the waist down) and one is a quadriplegic, (paralyzed from the neck down) with only limited use of her arms. This show doesn’t only focus on the fact that these women all have severe disabilities; it also highlights how they’re moving on and living their lives normally.

I think this is the most inspiring part of the show. The fact that these women (who were once able to walk on their own two feet and do things for themselves, but are now confined to wheelchairs) can still be happy and successful shows that anyone can overcome struggles in life. If you are alive and breathing then everything else should be okay.

I think that this show is valuable because it shows that being beautiful has many definitions, and that having a disability is one of them. Although these women must depend on their wheelchairs to get around, they still manage to go to the beach, date, shop, and are thriving independent women. The show also emphasizes the importance of having positive friends who can help motivate and bring out the best in you, so that when you’re faced with challenging times it will be easier to overcome them and stay focused on your dreams.