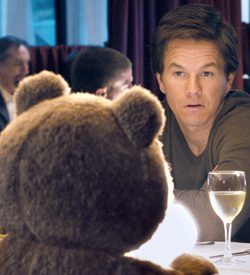 I saw the movie “Ted” last weekend and as most of the trailers showed, it was very funny. John Bennett and Ted (his teddy bear) were best friends when John was a child and are still best friends as adults. They continue to do the same reckless things, and John (who is human and has actual responsibilities) is easily influenced by his buddy. He often drops work or hanging out with his girl to go smoke, drink, and party with Ted. His girlfriend doesn’t like it, and believes that John needs to stop.

Ted is produced by the same group of people who produce the show Family Guy, and as with Family Guy, I believe that there’s a lot of truth in what’s being told. I think that sometimes people get stuck somewhere in their childhood or adolescence. They think that they have so much time to grow up and handle their responsibilities, and they disregard the years passing them by.

I also think that some people have friends that aren’t really good for them, as in; they don’t really show any positive examples. In Spanish there’s a saying “dime con quien andas y te dire quien eres”, which means “tell me who you’re with and I’ll tell you who you are.” This isn’t always true – if your friend is going down the wrong path it doesn’t mean that you have to follow their steps, but it often happens. If you surround yourself with people that are negative, have no motivation, no ambition, and no goals, then there’s a good possibility that you’ll end up like that too. Most people seek social acceptance, so if they’re in the same situations as their “negative” friends, they’ll be accepted without having to put effort into doing anything else.

I don’t think that you have to completely break away from those friends, because after all, you’re nobody to judge, but I do think that you need to limit how much time you spend with them. I think that it’s also important to surround yourself with more positive friends and develop your own sense of self. You need to establish your own motivation and goals so that you can finally break away from that “child-adolescent” phase and become a responsible adult.