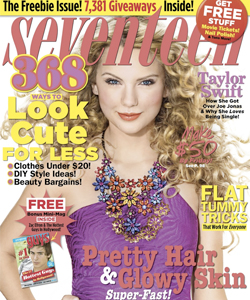 Have you ever looked in a magazine, or watched a commercial on television and said “WOW, I really wish I looked like that!” I know that the media portrays everyone as picture perfect, and you wish you were perfect too. But what is perfect anyway? Is it being a size zero, having clear skin, blue eyes, and long flowing hair?

Julia Bluhm, a fourteen-year old from Waterville, ME., asked the same question when she saw all the digitally retouched photographs of models in Seventeen magazine. As you may know, most photographs in magazines are retouched to enhance an object or a person. This “you’re not good enough” message the media is sending to girls out there isn’t doing much for girls’ self-esteem. Bluhm was really hurt, and also concerned about these “fake images”, so she decided to be an activist for teen girls. With the help of a young feminists’ group called SPARK, she created an online petition asking Seventeen magazine to include at least one photo spread in each issue that isn’t altered in any way. The petition received over 72,000 signatures.

Other young female activists followed this same idea when they protested a line from Lego products for girls called Friends. These Lego pieces are not for creating any old building, but for hair salons and cupcake shops. I think it’s great that young women from all over the world are bringing awareness to issues that impact girls. In my own opinion, I feel like the media has a certain mindset and even criteria that they expect girls to abide by. Magazine articles and images send messages to girls starting at a very young age, such as; “you need to look like this” and “you need to dress like that.” This is wrong on many levels. It’s ok if you’re not a size zero, not tall, don’t have perfect skin, and don’t have long flowy hair; you are beautiful! At the end of the day, we should accept and respect our own personalities, bodies, and minds. Being perfect is simply just being YOU.