Sad Desk Salad: An Entertaining Read with A Good Message 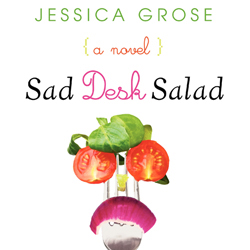 Alex is an intelligent and creative writer living in New York City who writes for a gossip blog called “Chick Habit”, similar to perezhilton.com. She leads a relatively normal life aside from the fact that her job consumes her from 7 am to 7 pm. She’s constantly trying to find the latest gossip tips for her demanding British boss Moira, and hopes her page views will be higher than her competitive co-workers.

The novel follows a chaotic week in Alex’s life when her world is turned upside down for many reasons, but particularly for finding some juicy gossip on a political candidate’s daughter. Alex has to choose between her career and damaging the life of a young girl with a very prominent family. She publishes the scandalous story and ends up discovering more about herself than she ever thought.

After I finished reading this novel, I was surprised by the message it left me with. Yes, it was an easy read, but I also learned that you need to be really careful about what you see and read on the internet. Searching for something that seems innocent might not be to others, and you can easily wind up in trouble.

I remember in high school when a few girls emailed jokes to one another and the administration read their emails. The principals found the jokes to be more racist than funny, and the girls were punished for their behavior. They could no longer use their school email accounts and the administration started to monitor their other computer activities.

So, the moral of the story is, be careful what you say and put up on the internet. You never know who might be watching and where the information could end up!