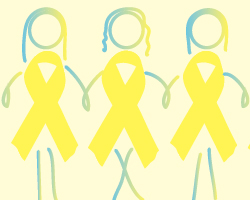 Hello again! Now that I’ve (hopefully) motivated you to start your road to recovery with endo, I’d like to tell you a little bit about my own journey and struggles. The first symptoms I ever had were what I thought were just terrible, terrible cramps. I had countless nights of crying myself to sleep, not being able to focus in school, and even having to stay home from school to rest.

I had to deal with the lack of energy, the constant mood swings, and the awful pain that came along with it. The scariest thing about it was that I didn’t know what was going on with me, and neither did anyone else. I went to many different specialists, took many different types of birth control pills (which had plenty of negative side effects), and had multiple ultrasounds that “looked normal” to the doctors. However, I still knew deep down that I wasn’t OK, no matter what test results came back.

One day, my mother, her friend, and I were talking about my symptoms. My mother’s friend said to my mom, “It could be endometriosis”. (Neither of us knew what endometriosis was at the time.) She described all the symptoms of endo and it turned out that I had every single one of them. The sad part was, no ultrasound could pick up the signs of endometriosis. After hearing this news, I went back to my gynecologist and told her what I’d found out. She told me that “she thought it was that all along”.

After realizing she didn’t know how to help me, I knew I had to go to someone who truly knew what they were doing. I finally went to Boston Children’s Hospital where I met my savior, Dr. Laufer. I’d told him all about my journey – the pain, the pills, and the side effects. He talked to me about the possible reasons for my symptoms and suggested a laparoscopy to find out if I had endometriosis. I had my surgery on March 5, 2012 and it was the best decision I’ve ever made.