Getting Friend-Zoned: A Guys’ Survival Guide 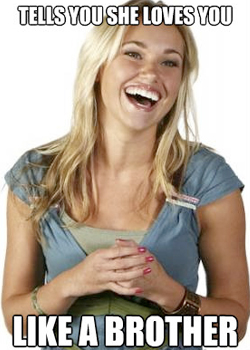 I have a large but tightly knit group of friends; we all hang out together, go to school together, and of course we all know about everyone else’s romantic interests. Recently, two of my friends (let’s call them Rusty and Tabatha) were the center of quite a bit of drama in our group. Tabatha and Rusty have been close friends since elementary school, and we’ve always suspected that they had a thing for each other. Two weeks ago, we were all at a party, and, as usual, Tabatha was sitting right next to Rusty, and he had his arm around her. Towards the end of the night, I saw Rusty lean in for what I thought was going to be their first public kiss. Just as Rusty leaned in Tabatha put her hands on his chest. “Rusty, I just want to be friends!” she said, and turned beet red.

Getting “friend-zoned” is when you have feelings for someone but they aren’t reciprocated, and they “just want to be friends” with you. When it comes to relationships, this is every guy’s worst nightmare. To be turned down like that puts us in a super awkward situation. Are we still friends now? Are things going to be different? Did I ruin my chance of staying friends or (hopefully someday) becoming more than friends with this person? Questions like these race through our heads.

Dude, how do I know for sure that I’m in the friend-zone?

The only way to know for sure is to have an honest conversation with the person you’re interested in. It’s really important to remember that you shouldn’t assume they have feelings for you in return. Depending on your personality, you might go bold and just blurt out that you have feelings for someone, or try to kiss them. Another option is to use “what if’s”, saying something along the lines of “what if we were together?” and explaining your feelings from there.

Here are two surefire signs that you’re in the friend-zone:

So I’m definitely in the friend-zone. Now what?

Open and honest communication is really hard; especially if you’re worried you may lose a friend. However, I’ve found that being straightforward and honest leaves no room for misunderstandings and is the quickest way to really find out how someone feels about you. All in all, being friends (and just friends) with someone isn’t all bad; you may end up becoming closer than you were before.