Getting Into Game of Thrones 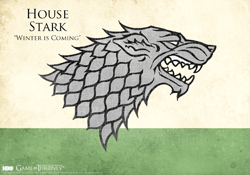 One of my guilty pleasures is reading Fantasy/Sci-Fi novels. My older brothers got me into them when I was just starting to read, and some of the first books I ever read were 600+ page epic fantasies because I was trying to be like them. I didn’t join the Game of Thrones craze when the series first came to HBO because I never read the books, but once the second season of the show came out I caught my dad watching an episode and started watching it with him. I figured out the characters and their plots and was hooked instantly! Within days I watched all the available episodes.

Game of Thrones has fought its way into the mainstream becoming a huge phenomenon that won a slew of awards including two Golden Globes for “Best Supporting Actor” and “Best Television Drama.” Some of you may have seen the hash tag #winteriscoming or the meme of Ned Stark (one of the main characters in the book) staring off into the distance holding his sword. I know a bunch of people who throw Game of Thrones themed parties where they dress up like characters from the show, cook food inspired by the show, and watch the series together as new episodes come out.

Anyways…I’m getting carried away. My point is that you should totally check out the show, and more importantly, you should read the books! The series has recently sparked new interest in reading – even in those who don’t usually make it a habit. I had trouble learning how to read when I was young, and it’s super frustrating to keep on trying to practice reading, but this series was so good that I read six, 600+ page books in less than two weeks.

Each time you finish a book, especially a big one (such as Harry Potter, or Game of Thrones) which is long and detailed, you get this awesome feeling of accomplishment. You close the cover, smile to yourself, and then want to talk to everyone who has ever read the book about what you think.

So join the Game of Thrones bandwagon, and regardless of whether you side with the Lannisters, Starks , Targaryens, or Baratheons, remember; Winter is coming!