Learning to Speak Up 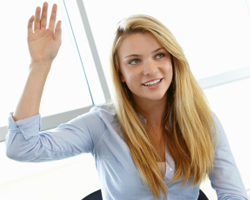 We all get these feelings at times – even doctors! Learning how to speak up for yourself is an important part of growing up. Letting others know your thoughts and feelings, will help you feel stronger and more confident.

What does it mean to “speak up”?

Here are some examples:

Many teens (and adults) find that speaking up is difficult. Sometimes it may seem easier to keep your feelings inside to avoid becoming embarrassed or having a hard conversation. It can be tricky to know when the best time is to speak up for yourself – for example, should you speak to a teacher privately or raise your hand in front of the classroom?

Steps to speaking up:

Speaking up can be hard to do, but don’t give up! You‘ll find that with practice it gets easier. Get tips from friends, siblings, parents, coaches and teachers about how they learned to speak up.

Tagged with: Speaking up