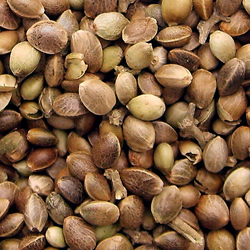 When you hear the word hemp, what do you picture? You might think of the rope-like material that people use to make necklaces and bracelets, or maybe you think of a marijuana plant. While hemp is in the same plant family (cannabis) as marijuana, it’s very different. Hemp has little to no THC (the chemical in marijuana that causes the “high” feeling) in it, and unlike marijuana, hemp isn’t a drug at all. Hemp can be made into a number of different things from paper to beauty products – and the seeds can even be eaten!

Hemp seeds have a nutty flavor and are high in protein and healthy fats called omega-3s. These little seeds have all of the amino acids that you need to get from food (which is rare for a plant food!). Hemp seeds are sold in bulk and can be added to lots of things such as oatmeal or salads, mixed in with cereal, or baked into crackers or muffins. Hemp protein is being added to some protein powders and products such as granola and yogurt. You can also buy hemp seed oil, a concentrated form of the oil that’s made from the seed.

While experts agree that eating hemp seeds can be healthy, the relationship to marijuana is too much for some people. The Air Force, for example, recently banned one flavor of Chobani yogurt because it came with a small mix-in section of chia seeds, hemp seeds, and walnuts. Members of the Air Force are told not to eat hemp seeds in any form due to the fear of testing positive for THC (even though this is very unlikely). It’s also illegal to grow hemp in America (but not to sell or eat it). Some people argue that the ban on growing hemp is a shame due to the fact that it can be easily made into so many different materials and isn’t harmful to the environment.

There are plenty of other ways to get omega-3s and amino acids in your diet, but if you’d like to try out hemp seeds you’re likely to find them (either on their own or mixed into another product) in a local health food store or natural foods section of a grocery store. Studies have shown that it would be nearly impossible to test positive for marijuana use after consuming hemp. However, if you have to get a drug screen for any reason, it might be better to avoid hemp seeds and hemp seed oil for the time being.