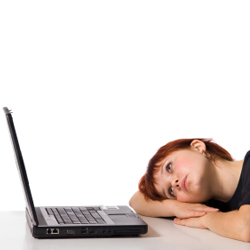 Are you having Facebook fatigue? Do you feel as though Facebook has turned from a social hub into a family picnic where your privacy has been encroached on? Have all of your family members including your mom, dad, twelve aunts, grandma, and great uncle joined and liked your profile picture for everyone to see? It can be pretty embarrassing (trust me I’ve been there). You want a place where you can freely post what you think and have friends post on your wall without having to worry about which family member you forgot to add to the restricted list.

Don’t fret: you and I are part of the “94% of American teens [who] have a Facebook account . . . but [are] using it less and using it more carefully” (Pew Internet and American Life Project). We’re tired of having to constantly keep up with the privacy settings and for this reason are looking into other social networking sites. Even Instagram is starting to become a place where mom and dad are checking up on us and  crash that private party we were hoping for. So where else can we head? Where else can we go in order to express who we are, how we feel, and how we interact with our friends without having to worry about our weekend being the topic of conversation at this Sunday’s family brunch?

The answer is Twitter. Twitter is less likely to be filled with your friend’s parents tweeting about their day. It’s a place to go, and, in 165 characters or less, say how you feel, re-tweet what others are posting, or interact with the celebrities that you wish would notice you (well, that’s at least what I’ve been doing).

We’re also expressing ourselves on “micro-blogging” sites such as Tumblr and Pheed. Pheed is a relatively new site (one that I’m not a part of) that has seemed to be creating a big hoopla, and might be worth it to join. Pheed members are more on the artistic side; such as musicians, actors and filmmakers, and Forbes is calling it “The New Twitter.” Pheed is a fast and simple way to share what’s happening in your life, and combines the best features of many social media sites (such as Facebook, Instagram, Twitter and Tumblr) all into one app. Will Pheed be the next social media site to take over? It’s up to us teens to decide.