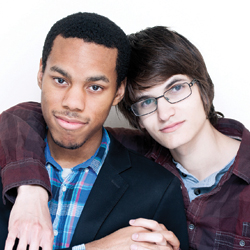 In “I’m Gay” — Part 1, we brought you David’s coming out story. This time, I’m going to tell you about JB. His experience is completely different from David’s.

Erica: Did you come out to your parents?

JB: The person I came out to was my mom. She asked me when I was in the 7th grade whether I liked girls or not and I said “I’m not sure who I like, but I don’t like girls like the rest of the boys at school.”

Erica: So basically your mom came to you with questions before you decided to tell her?

JB: Yes. I stayed in the closet until the 9th grade. A boy in class made a reference to something gay people do and then said “right, John?” I’d had it with the jokes, so I yelled out “Alright we get it, I’m gay! Get over it!” I was afraid I would lose friends but I didn’t. I was actually embraced as the only student in my grade to be “out” of the closet.

Erica: That’s really good. I’m glad you had such a positive experience.

JB: Thanks. As I continued to tell my close friends, they all said “We already knew!”

Erica: If you could, would you do anything differently?

JB: Yes, I would have told people I’m gay on my own at a different time, but I don’t know when that would have been. There was this one male friend I was close with since elementary school that eventually stopped talking to me. To this day, he still acts weird towards me.

JB didn’t have to work up the courage to tell his parents that he was gay because his mother took the initiative and asked him. Fortunately, he had the support of both his mom and his friends. Some people tried to make him feel uncomfortable at school, but instead he came out to everyone and put an end to the jokes—a very smart thing to do (in his particular situation). Although JB did lose a friend, he’s okay with it.

As I mentioned in “I’m Gay–Part 1”, everyone’s experience is different and you should only come out when you feel comfortable to do so and you are ready to deal with the consequences. In JB’s situation, the only negative consequence was losing a friendship, but he still got the acceptance of his mother and other close friends.

As long as you feel okay with the way things are, it doesn’t matter when, how, or to whom you come out. Your sexual preference is very personal. You should be the only person making any decision about disclosing that information and when.