Why I Never Started Smoking 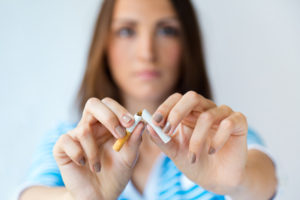 One thing that I remember from my middle school health class is that tobacco addiction is a drug addiction-that’s why quitting is so hard. That stuck with me, as did all of the other horrible facts that I learned about the dangers of tobacco smoke, like the fact that it can cause cancer (of the lungs, mouth, nose, stomach, etc.) and the fact that it can increase your risk for other diseases (such as coronary heart disease).

As you may know, there are a ton of toxic substances in cigarette smoke, but you may not realize that there are actually more than 4,000 chemicals found in tobacco smoke, such as carbon monoxide (which is a poisonous gas) and tar (which unfortunately is what stays in your lungs long after you finish your cigarette) and more than 50 of these chemicals are known to cause cancer. All of this information that I learned when I was younger made me realize that it was never worth it to start smoking, even though a lot of my friends did.

I don’t think there is one person left in this country that doesn’t know that tobacco is a known killer. It is actually the largest cause of preventable death in the world and it is the one risk factor that is tied to the four major non-communicable diseases (cardiovascular disease, diabetes, chronic respiratory diseases, and cancer). According to the World Health Organization (WHO), the effects of smoking claim the lives of almost 5 million people a year and that number is expected to increase to 8 million by the year 2030. According to the CDC (Centers for Disease Control and Prevention), the list of diseases attributed to tobacco use includes COPD, coronary heart disease, cerebrovascular disease, stroke, as well as lung, trachea, stomach, cervical, bladder, colon, esophageal cancers and cancers of the oral cavity, just to name a few.

In addition to all of the health risks that are associated with smoking, it also is a major risk factor for non-smokers who are exposed to the harmful effects of secondhand smoke. If that doesn’t prevent someone from beginning a smoking habit or stop if they already are, then I think the following should. Cigarettes have now become more dangerous than ever before according to a recent report from the U.S. Surgeon General. This is because tobacco companies have changed the design and the ingredients of cigarettes putting smokers at greater risk, all in order to make cigarettes that are more addictive and less harsh to smoke so that consumers will buy and smoke more cigarettes.

You can check out this graphic that was featured on tobaccofreekids.org, representing the new deadly composition of cigarettes.

This is what the tobacco business is doing; it is sacrificing people’s health for profit and this is one of the reasons why I always encourage people I know (who smoke) to quit. I know that it’s not easy and that it may take multiple tries, but the effort will be worth it in the end. Trust me, your wallet and your future will thank you. The health consequences are just not worth it.

If you or someone you know is interested in learning how to kick the smoking habit, please check out our guide on How to Quit Smoking for tips on how to be successful.

For more information on how to quit:
http://betobaccofree.hhs.gov/health-effects/smoking-health/index.html