Sexual Assaults on College Campuses: What every student should know 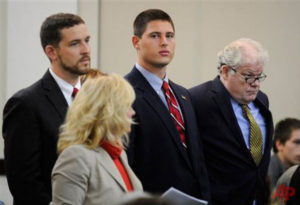 Stress seems to be a normal aspect of college life; students are constantly balancing classes and schoolwork, staying physically healthy, maintaining friendships and relationships, and trying to figure out what the future holds. The last thing we need is one more concern added to this list. However, sexual assaults on college campuses have been in the media at an alarming amount lately. As the former Vanderbilt football players involved in a horrible rape scandal are finally going before a jury, I would like to take a few moments to debrief sexual assault and what college students can draw from this case, without delving into the graphic details.

In June of 2013, a 21 year old female student allegedly went to a bar with a fellow student she was casually dating, Vanderbilt University football player, Brandon Vandenburg. According to an eyewitness, the victim was later observed to be passed out when Vandenburg was seen carrying her into his dorm. It is believed the sexual assault, which also involved additional males, took place shortly thereafter.

Vandenburg’s defense blames this life-changing event on a college culture of binge drinking and sexual promiscuity. The National Institute of Health on Alcohol Abuse and Alcoholism reports that 97,000 students between 18-24 years old are victims of alcohol-related sexual assault or date rape each year. I believe that sexual assault, however, is NEVER acceptable under any circumstances.

What makes this case particularly unique in light of the fact the victim was unconscious is that the incident was videotaped on a cell phone. Rape is defined as unlawful sexual intercourse or any other sexual penetration without the consent of the victim. In most states people cannot legally consent to sex while intoxicated. It is important for everyone, especially young students, to understand the importance of standing up and defending themselves if they have been sexually assaulted. It is never the fault of the victim, and you should always seek help when needed. It might be useful to identify adults at your college or university who can offer support if you or someone you know has been assaulted, so you can readily call upon them if they’re needed.

Below is a list of ways you and your friends can try to ensure your safety, while still having fun and going about college life: