Getting the Full Story 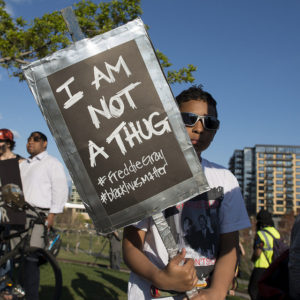 The social media and news keep people informed about current events on a day to day basis. If you have been keeping up with the media lately, you have probably heard the name Freddie Gray. Since a lot of people get most of their news from one main source, it might be difficult to get the full story. After watching several news stations cover the story about Freddie Gray, I noticed how big of an impact the media can have on the way an individual may perceive an event. For those of you who have no idea who Freddie Gray is, the story goes as follows:

On April 12, 2015, Freddie Gray was arrested by Baltimore police for allegedly possessing a switchblade. After being handcuffed and shoved into a police van, Gray fell into a coma and was taken to a trauma center. After seven days of being in the trauma center, Gray died, allegedly from injuries to his spinal cord.

You might be thinking that the story is pretty straightforward but a lot of things in this case are unclear. Even though some eyewitness accounts say that the officers used “unnecessary force against Gray while arresting him,” the way in which Gray sustained injury to his spine is still not clear. Baltimore Police Commissioner Anthony Batts reported that the officers did not secure Gray inside the van when they transported him to the police station (which is typically the case). The medical investigation also revealed that Gray allegedly sustained injuries to his spine while riding in the police vehicle.

As a result of Gray’s death, many protesters took to the streets of Baltimore to protest against police brutality. These protesters attracted the attention of people across the nation. However, a lot of people’s knowledge about the protests and Freddie Gray’s story were limited due to the way the news displayed the story. Throughout the entire Freddie Gray case, most news casts highlighted the violent parts of the protests. Though some of the protests were violent and caused civil disorder, the media neglected to highlight the thousands of people who were protesting peacefully. Regardless of your beliefs about this story, and protests, I believe that people should be informed on all the aspects of a situation and not just the negative or positive side. Since the media mostly covered the violent protests throughout Gray’s case, many Americans lack an understanding of why protesters began marching through the streets of downtown Baltimore.

By viewing a story through just one lens, people tend to neglect the rest of the facts. Many people get their information through just one source, but it’s important to read articles from different media venues including social media sites in order to learn about different aspects and opinions of a particular story. By doing so, you’re opening yourself up to various perspectives that may or may not help you form a better understanding of the whole story.