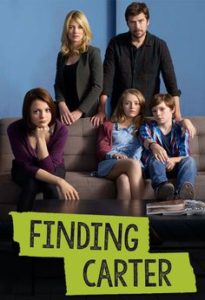 Recently my older sister recommended that I watch a show called Finding Carter. I have to say that I’ve fallen completely in love with this show. Finding Carter is a TV show that many teenagers can relate to accept for the part when “Carter,” (the main character) finds out she was kidnapped when she was just 3 years old. The show is full of betrayal, lies and family drama. When I watched the first season of the show, my emotions were all over the place. I laughed, cried, I was scared, and confused but most of all I was always on my feet!

Carter is a young teenage girl who is strong and always has a solution for everything. She is also stuck between the person she is and the person people want her to be. Carter is the type of girl that is always determined to fix everything bad in her life. She always wants the people around her to feel happy and full of life. When Carter was sixteen she found out that she was kidnapped. Ever since she realized that the person she was calling “mom” wasn’t her actual biological mom, things started to go downhill.

When Carter returned to her biological family’s home she had to face a lot of different things. She had to deal with living with her “real” family and receiving what she perceived as a lot of unnecessary attention.  Carter’s homecoming also took a toll on her siblings. Her twin sister turned to drugs and alcohol for comfort and she began sleeping with her friends for attention.  She did all that because she thought that since the attention was on Carter, no one was going to care about what she did. Shortly thereafter, Carter’s younger brother begins to have anxiety issues and has a hard time dealing with their family drama.

I think that Finding Carter is a prime example of what some teenagers may go through when they have to cope with family drama. The show demonstrates that having a lot to deal with can put stress on a teen’s mental and physical health.

I’ve never really experienced any family issue that would push me to the edge like Carter’s twin sister and younger brother, but I do know that I wouldn’t know how to handle it by myself. That’s why I find it important to talk to someone. If you’re distressed about something, you should talk to a trusted adult such as your guidance counselor, teacher, a very close friend or even your own parent. It’s okay to let them know what is bothering you.

I really recommend watching this show because it tells an important message and it shows how some teenagers deal with conflict and stress within the family.