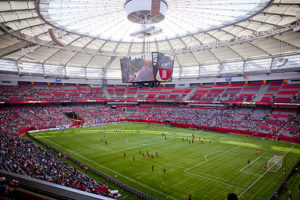 The U.S. Women’s National Soccer Team once again proved its dom­i­nance on the world stage, win­ning the 2015 FIFA Women’s World Cup Final on July 5, 2015 against Japan. For the first time in history, a women’s sports team has been celebrated in a famed New York City ticket-tape parade! The sheer magnitude of the number of people who tuned in for the USA vs. Japan women’s World Cup final is mind-blowing.

Nearly 26,700,000 Americans tuned in to watch the US blow out Japan 5-2. To put this number in perspective, 27 million viewers for the women’s World Cup final is more than game seven of last year’s World Series and the deciding game of this year’s NBA Finals. It is also more than last year’s men’s soccer World Cup Final. In other words, this record-breaking viewing of the World Cup final reflects the increasing prominence of women’s soccer in America.

However, many players and fans alike have expressed frustration in the prize money FIFA pays to the winning teams. The U.S. Women’s national team goes home with a $2 million prize bonus, whereas the German men’s team was awarded with $35 million for winning the 2014 World Cup. In fact, the men’s teams, which didn’t even make it to the FIFA World Cup finals in 2014, received $9 million in prize money from FIFA.

Despite the fact that FIFA needs to step their game up, we are so proud and completely mesmerized by the raw power and drive of this amazing group of women. These strong girls are exactly what the future of women’s sports needs and they are great role models for all young women soccer players: “We’re always fighting for each other. You look at your teammate and you’re just like, I’m not letting her down,” says Captain Christie Rampone, who is the first 40-year-old- to play in a women’s World Cup game.

How losing helps them become a better player: Christen Press, who plays forward, says, “If I missed a shot, I would spend a lot of time thinking about how I’d disappointed my teammates. Then I learned how moments of struggle make you stronger.” Christie agrees and adds, “Regardless of the score, if you’re not fulfilled and happy, it’s not a success.”

How they’re stronger together: Abby Wambach, who plays forward and even has an Olympic medal under her belt, says: “Whether you are the CEO of a company or a professional soccer player, you need people around you to help you achieve. My teammates have taught me so much—not just about the game but also how far I can push my own limits.”

For those who watched the Women’s World Cup, you can see that all the players were fighting to make one of their dreams come true. Someone, somewhere was inspired by their dedication and teamwork whether its inspiration to play soccer and get to the World Cup, or inspiration to simply go after something you want in life. My advice for anyone this summer is to watch sports games. Let yourself be moved and wowed because those games and games by other inspiring athletes, such as Serena Williams, show the world that anything is possible.