The Trouble with Pink and Blue: Why gender stereotypes are bad for your health 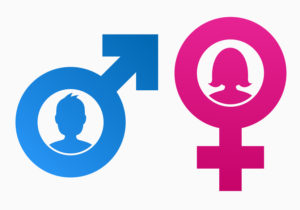 Did you know that the idea that pink is for girls, blue is for boys is a pretty new idea? Historian Jo B. Paoletti* discovered that in the U.S. in the early 1900s it was often the reverse! Blue for girls, pink for boys. No kidding.

What does this have to do with our lives today? Everything. It reminds us that what society thinks of as “feminine” or “masculine”—how we understand gender overall—changes over time. And that means it’s important to always question our basic ideas about gender, including gender stereotypes.

WHAT ARE GENDER STEREOTYPES

Gender stereotypes are ideas about how girls and boys, women and men are “supposed” to act, talk, think, and behave. (Back to that old “pink is for girls, blue is for boys” idea.) Researchers have found that kids as young as 3 years old have already absorbed cultural stereotypes about gender. This matters for many reasons, including for your health!

HOW GENDER STEREOTYPES MATTER FOR HEALTH

Research shows that gender stereotypes can be harmful to your health. Here are three ways:

These are just a few of many possible ways. Can you think of some other ways that gender stereotypes might be bad for health?

WHAT YOU CAN DO

These may seem like huge societal issues—and they are. But there are many things you can do in your own community. Here are some ideas:

Guides for Allies and for Trans and Gender Nonconforming student from the American Civil Liberties Union (ACLU) and the Gay, Lesbian, and Straight Educators Network (GLSEN):

Information on the rights of transgender and gender nonconforming students in schools:

Resources for teens from the organization Gender Spectrum:

* See Jo B. Paoletti’s book, Pink and Blue: Telling the Boys from the Girls in America (2012) for more on this and for interesting early 20th century photos of boys in skirts and girls in rompers.