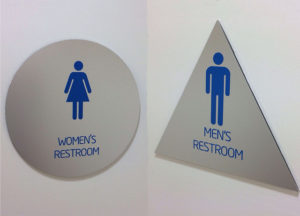 You may have heard about one of the recent bills that has made headlines all over the country.  HB2, which stands for “House Bill 2,” was passed and signed into legislature by North Carolina Governor Pat McCrory on March 23, 2016. HB2, also known as the transgender bathroom bill, specifically bans transgender individuals from using public bathrooms that align with their gender identity. Instead they are required to use a bathroom that matches their biological gender as documented on their birth certificate.

People both directly affected and allies of the transgender community, including the US Justice Department feel that this law violates the civil rights of transgender individuals.  Many people oppose this law because they feel it directly discriminates a certain group. Those who support it feel that allowing transgender people into bathrooms that don’t correlate with their birth gender will increase sexual abuse crimes in public restrooms and make people feel uncomfortable and unsafe.

One of the first things that came to mind when I first heard about HB2 was why and why now? The transgender community has existed for quite some time and the issue of which bathroom someone should use has never been a concern. It was never illegal for a fully transitioned transgender male to use the men’s bathroom before, so why does it have to be now? Matt McTighe, the Executive Director of a LGBT rights group said, “this law is a solution to a problem that doesn’t exist and lawmakers must take immediate action to repeal it.” The other issue that arises is logistically speaking, is how will this law be regulated?

If a fully transitioned transgender female walks into a women’s bathroom, how will anyone know that at birth, she was a male? People make the argument that it makes them uncomfortable to share a restroom with someone who does not have the same birth gender as them. How do they think someone who identifies as a man, feels like a man, and knows he is a man feels going in to the women’s restroom, because that’s what his birth certificate says to do?

There are so many thoughts and questions but perhaps the most important question to ask here is when did being different become such a bad thing?