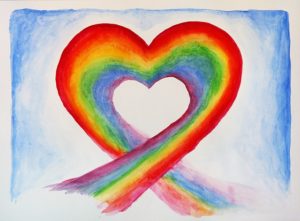 I broke up with my first ever boyfriend on Valentine’s Day my freshman year of college after he refused to see me perform in The Vagina Monologues. He claimed he was uncomfortable hearing me speaking the “V” word publically. I was “peeved” (as my mother might say). But I let it slide and drove with him to Sonic for a Sweetheart Shake after the show. We sat in his Mazda with the heat on full-blast warming our feet and faces. The first few chocolate cherry sips went down easy, and then he said something unforgivable—I can’t remember his words exactly—something like, “Adam and Ben are dating? Ugh, that’s just not right.”

“Ex-squeeze me?  Adam and Ben are our friends and they’re great together.”  Then I poured the remaining two-thirds of my shake in his lap. Mind you, I am not one to waste a milkshake.

I broke up with my second ever boyfriend on Valentine’s Day two years later. This time, no shakes were poured on pants. It was more like… “I love you. A lot. This just isn’t working.”

Several days after the split, I appeared in the opening night performance of The Laramie Project—a play about the city of Laramie, Wyoming’s response to the murder of gay college student Matthew Shepard. Matthew’s murder was denounced as a hate crime, and this piece of theatre helped shed light on the dangerous realities of homophobia. Matthew was 21 when he died. I was 21 when I played the police officer who found his body tied to a fence post in the desert. Matthew was killed because someone hated how he loved. I was alive and single and sad, but also free and happy and loving the opportunity of telling Matthew’s story on stage each night.

Whoa. Is this the most depressing Love blog you’ve ever read or what? Bear with me! It may end happily…

So I’ve actually only had those two V-Day break-ups. But the holiday of hearts has been soured for me. I feel like the “Disney fantasy fireworks forever” kind of love simply does not exist—like the myth of romance I grew up with spilled out with my milkshake in the car that night.

And as such it is entirely

Love can be found almost anywhere you look. In any flavor, gender, T-station, orientation, young, and old, and cheese with mold (I love cheese with mold). For me, V-Day’s gotta be reclaimed! Because I love a lot of folks, I just love them differently than childhood narratives told me I would.

What I’m saying is perhaps said best by one of my favorite authors. Take it away, Jeanette!

“Do you fall in love often?

Yes often. With a view, with a book, with a dog, a cat, with numbers, with friends, with complete strangers, with nothing at all. I love widely, indiscreetly. I forget it is myself I am trying to love back to a better place.”

With respect for all kinds of love,