Opening Your Heart to the Arts 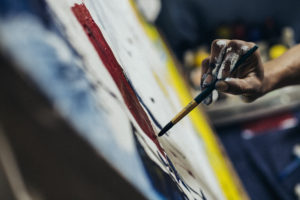 My father was a bass player in a semi prominent punk band in Boston in the 80’s. Besides the always amusing photos of him throwing the goat in skin tight leather pants with black nail polish, I have taken a lot from that time in his life. Growing up he always emphasized the need for art. His father was a lawyer and after his band days and some odd years bartending he followed suit, and so he understood the importance of logic and facts, however he would say that art was something else. He would say, “the effect art has is not always the easiest to understand because it doesn’t touch your brain as much it does your heart and your gut.” That sentiment has stayed with me.

I have tried pursuing art in just about every capacity, and failed in most, however I have found that simply engaging with it is one of the most enjoyable experiences in the world. Whether it’s the way a song makes you feel in your gut or the place a book or TV show or movie takes you, or the feeling of painting or drawing something you think is interesting. I think everyone should engage with art in some way, or at least have the opportunity to access to it.

I was fortunate to have had the exposure to art that I did, as well as the support from my parents to pursue it. In addition to supporting an interest in art, my parents made me choose an instrument to play when I was little. I chose the cello purely because it was bigger than the violin, which my brother had chosen. I soon became resentful of the practice and classical music which I found to be beyond boring, and so I stopped playing the cello and started playing the bass guitar instead. I connected much better with that. Soon afterwards my family and I moved to France. It was crazy to be immersed in a culture with such a high regard for art. I began to teach myself how to draw by sitting in front of sculptures and paintings at museums, sketching on paper or a bar napkin from a nearby restaurant. I was horrible at it but it felt good and that was, and is, all that matters. I have come to realize it is the creative process that counts and not the end result.

I was lucky to have the kind of access to the arts that I’ve had however that is not the case for a lot of people. I believe that everyone should have access to some sort of creative outlet. Here are some ideas to get started:

The most important thing to remember is to enjoy whatever type of art or music activity you choose to engage in.