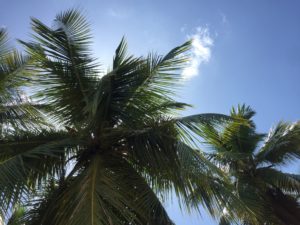 Paradise. What comes to mind when you read that word? Sand that is so white it could be sculpted from a chunk of marble. An ocean so blue it is practically indistinguishable from the sky and the clouds, and the sun a brilliant burning furnace, the only escape the ribbed shade of the palm fronds that dangle and dance in the light coconut breeze. Paradise. Truly. That was my idea of paradise; however it always seemed like a pipe dream. An unattainable image that lived inside my Pinterest board named “getaway”. But I found it. This past August I boarded a plane  to a small airport situated on the northwestern coast of Puerto Rico. The one place on earth where even the beaches speak Spanish; Aguadilla.

I traveled with my girlfriend and her mother. We spent a week soaking up the rays and getting tan (or just very burnt in my case). We stayed with my girlfriend’s grandmother whom we affectionately call “Grammy”. She lives in what can only be described as the most adorable shack in this hemisphere. It was built on a small garden full of avocado, lime, and banana trees. Grammy demonstrated to us one sunny afternoon how she would take a machete that is practically the size of her and hack bunches of bananas off the tree. There is a sunroom that looks out onto the garden and you can almost see the ocean. I would get up early and have my coffee and as the morning sun’s heat began to pierce the thinly veiled windows I would draw the trees and plants in the garden (which is actually way more entertaining than it sounds). We would grab bathing suits and rush off to the beach to try and get a few hours of sun before it became too much. The water was warm and clear and the air smelled like fresh coconut from the man who was chopping the tops off and selling the sweet juice from inside. I don’t know if it’s possible to fall in love with a location, but if it wasn’t love it was something comparable. I went home with my head in my hands and a whole mental library full of good memories.

I got back September 3rd. The first one hit, September 10th. “Irma”. It was devastating. The island had barely enough time to mourn then “Maria” made landfall. Two devastating hurricanes in the span of a month. Paradise left defenseless. It was jaw dropping to see the news coverage.

Puerto Rico’s economy hadn’t been in the best shape prior to the storms, so relief is an especially difficult feat. The island as of now is still without power. People are struggling to get food and clean water and many are without homes and in desperate need of help. It took a while to find out if Grammy was okay since most of the island has been without power. We recently learned that Grammy is okay and has returned to Boston. However her sun room (where I had my morning coffee each day) was crushed by one of the large trees in the backyard and most of the roof to her house is gone. In just a matter of a week, the place that I called paradise was almost completely destroyed by one of the strongest hurricanes ever reported. There are people still fighting for their lives in what I called paradise. So please, consider helping because every little bit will help to rebuild this amazing island. Learn more by following the link below.