China, Through the Eyes of a Chinese American 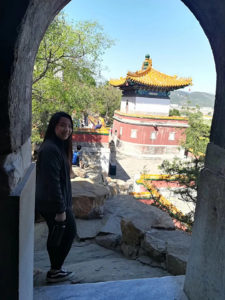 Although I am an ABC (American Born Chinese) I have never really experienced what it meant to be Chinese. Living in America, I am secluded from the elaborate temples, crowded markets, and traditional aspects of China. During spring break, I was able to have a taste of what it was like to live in China along with other high school students in the group. During my trip, I spent two rainy nights in Xi’an touring the Xi’an City Wall, watching the smoke of incense drift through the air near the Wild Goose Pagoda, bargaining at the Muslim market and admiring the vastness of the terracotta warriors. When we arrived in Beijing through the bullet train, I met up with my host family and Chinese exchange student that I hosted a month before.

It was interesting to see how different our lifestyles were while living with my host student, Angela and her family. I had to wake up at 5 am every day because Angela lived an hour drive away from her school. After school, we had to go directly home which took a 45-minute subway ride and a 20-minute car ride. Angela had a tight schedule, but it differed among students. Many of my classmates stayed after school to play basketball or hang out at the nearby mall because their host student lived close to the school. It was saddening that she had such a tight schedule because her entire week revolved around school and on the weekends she had to attend additional classes.

Although all of the classes I observed were in Chinese, I noticed that none of them were discussion based. Some students took naps, ate, and did other homework. Although I prefer how we learn in my own high school, I thought the Chinese high school had so many resources. They had their own museum, woodworking and art building, basketball and volleyball courts, ping pong tables and so much more as a public school. Their institution was so elite that the athletics from the Beijing Olympics trained at their school.

I enjoyed my time the most during school because we would take one or two classes a day and do touristy things afterward. We went to the Great Wall, Tiananmen Square, The Forbidden City, Temple of Heaven, Pearl Market, a hutong neighborhood (a neighborhood full of old, traditional houses), and had lunch with one of our alumni at our school who now lives in China. The Great Wall was one of my favorite places because I had unique experiences in both places. In the Great Wall, we took a chairlift up through the mountains and slid down a slide on our way down passing through the trees and overlooking the vast evergreen of the mountains.

What I learned the most during my trip was how two teenage lives could be so different. There were distinct cultural differences such as pushing into the subway rather than letting people exit first, seeing dinner as sacred family time rather than trying to make dinner as fast as possible and using car beeps as a warning rather than a way to express road rage astonished me the most. The odd part of it all was that rural Chinese people would take astonishment at us as well. We had countless people take pictures of our group because they have never seen foreigners before. It was once again a cultural difference because the people taking the pictures didn’t see it as socially inappropriate.

On the trip, I admired many temples, ate many traditional dishes, bought many souvenirs, but what I valued the most was the exposure I had to the culture that my family and ancestors were raised in. Although I cannot relive my childhood in China, I hope to revive and preserve my Chinese heritage by using what I have learned about traditional Chinese culture. It has only been my second trip to China, but I hope that I can rekindle the lost memories and richness of my Chinese culture through future adventures when I return some day.