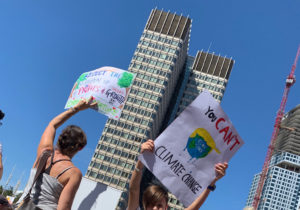 On a warm Friday, September 20th, 2019, I became a part of history. Citizens took to the streets in countries around the world, and what was most likely the largest global climate strike so far was in full swing. I was among the many students who did not attend classes that day so that we could go and protest. The earth is getting hotter and hotter, and the younger generations have made it their duty to put an end to this. In Boston, Massachusetts, I stood beside hundreds of people who took on this duty. For weeks prior, social media had been booming with posts regarding the time and place for when to strike. I knew from the post I’d seen that I had to attend. I noticed the strike was on a Friday, during school hours, so I was skeptical that my mom wouldn’t let me go. When I brought it up, she told me if I didn’t go to the strike, she’d take away my phone privileges! A group of close friends and I decided we would be missing school and going to protest together. More social media coverage announced to wear black, so when the day came, we all wore black.

I arrived to see a massive crowd of people wearing black, holding signs, listening to speeches, and chanting. Posters read things like “The earth is getting hotter than my imaginary poster” and “Enough is enough.” There were moments when the speakers played music, and it’d turn into a giant dance party. It felt amazing to be together with my people from my city all standing for the same cause. From City Hall we marched to our state house while chanting “Hey Hey! Ho Ho! Climate change has got to go!” I felt as if everyone in Boston could hear us. Helicopters were flying all around us to get their coverage for the news, reminding me that this global movement was history in the making, and I was part of it. I would get to tell my children, and their children, that I was a part of the generation that helped fight to end climate change. Thousands of participants expressed their passion for our planet, and spread awareness for the need to change so that we, and generations to come, may have a future.

Not only did this strike bring awareness on how we need to change, it also emphasized the need for our politicians to use their power and establish laws to limit corporation pollution. Especially in the United States, our corporations, factories or businesses produce most of the emissions in the world, and law makers are not helping to diminish that. The Trump administration repealed some of the environmental regulations, which will reverse the efforts made in the past to save the planet. With this said, saving the planet may sound out of the question. However, it is not too late. We must continue to protest and make our voices heard so that we can achieve change and live long sustainable lives. We can save our earth.