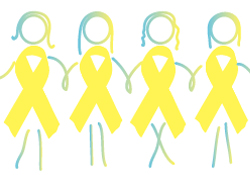 When I was in sixth grade I got my first period. I was at a friend’s house and we were about to go swimming. I went to the bathroom to change, and I saw blood in my underwear. I called my mom and we made up an excuse for why I could not go swimming that day – I was the first of my friends to get my period, so I was embarrassed. Little did I know I had no reason to be embarrassed, as my friends would come to me in the future asking for advice.

My first period was easy once I learned how to use a tampon. It was very light, with dull cramps that could be soothed with Advil. That was the end of easy periods for me. For the next five years, I had extremely heavy periods with crippling cramps. I went through super-plus tampons in 20-30 minutes, and my cramps sometimes got so bad that I could not move or breathe. Advil and heating pads never worked, and exercising made my cramps so bad I would come home after a run and sit in the bathroom screaming and rocking. I envied my friends that had “normal” periods, periods that didn’t stop their life for a week. I didn’t know that what I was feeling was abnormal.

My mom, grandmother, and sister all had heavy and painful periods as well, but only thought they had slightly more painful periods than some others, nothing to see a doctor about. I finally started seeing a gynecologist after telling my pediatrician about my cramps after running. My first gynecologist prescribed me three different birth control pills to regulate my period, all of which only made me bleed more and for longer. My longest period during that time lasted 90 days. I also tried a birth control patch, but that had the same side effects. At my next visit to the gynecologist we discussed a laparoscopy – a surgical procedure in which two tiny holes are made in the lower belly where two tiny scopes (cameras) are inserted. This procedure is meant to find and destroy any endometriosis – tissue from the inside of the uterus growing on the outside of the uterus, causing extreme pain. I was skeptical that this procedure would find anything, because I had convinced myself my pain was all in my head. But I wanted answers and I wanted to see if a diagnosis would help my doctors find a treatment that worked for me.

Right before my surgery my first gynecologist transferred practices, so my surgeon for the procedure was changed to the head of gynecology at Children’s. This was comforting to me because I knew I had to be in good hands. The laparoscopy was a simple and quick procedure and everything went as planned. When I woke up my parents told me that my surgeon had found and destroyed tons of endometriosis. I started to sob. I couldn’t believe I finally had a diagnosis and nothing was just in my head, and all my pain was validated. After a very short recovery, I was ready to start working with my new gynecologist to find the right treatment for me.

At my follow-up appointment for my laparoscopy, my new gynecologist started me on a progestin-only pill, Aygestin. I was expecting the usual – no period for the first month and then endless period after that. But here I am almost sixth months later and I haven’t had a period since. I have no pain, no bleeding, and I can live my life without a crippling interruption every month. I had one period immediately following the laparoscopy that was fairly painful, but my body was still bruised and recovering from surgery, and that hasn’t happened since. I am now living with endometriosis, but I forget I have it because of how well my new medicine works for me.