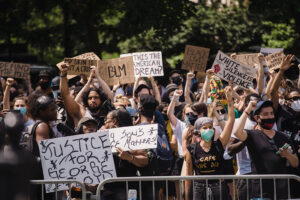 On May 25th, I was sitting in bed scrolling through Instagram when I first heard about George Floyd. His name didn’t mean anything to me then, but soon  my social media was flooded with pictures of him. I watched the video, and it felt almost impossible to grasp what was happening in front of me. Over the few weeks, I’ve been so sad about everything. I’m sad that an innocent man could be so brutally murdered, and I’m sad that it was the people trusted to protect that killed him. I’m sad that cities and towns are being destroyed and that there are protests at all, because there shouldn’t have to be.

I’m still shocked over both the murder but also over the huge response that the situation has got. Tens of thousands of Americans have gone to these peaceful protests, and I think that’s such a powerful thing. It upsets me that people are using the protests as opportunities to loot and destroy property, because it undermines the point. The looting and destruction gives many people the wrong idea, and the initial point was it’s our right to protest peacefully. It’s also crazy to see all the support for the BLM movement on social media. Just a couple of days ago, my Instagram feed was filled with pictures of people with their friends or just other silly things. Now there are hundreds of posts, and it makes me proud that so many people can come together and be supportive.

I’m also so sad at the government’s lack of support in such tough times. It’s awful that we’re in a situation that the national guard has to be called in to what are supposed to be peaceful protests. Not only that, but our nation’s president chose to incite violence in the Washington protest, just to prove some point. Given the huge response from so many people, I think that the government should be supporting our right to protest, and it feels like such a disconnect.

Lastly, I just feel like it’s our duty as Americans to speak up against such situations. At times, it feels a little frustrating thinking that there’s not that much that I can do, but in truth, we can all do something. I think that this duty is different for all of us. It could just mean educating ourselves about our police brutality so that we are aware of this institutional racism. It could mean posting and advocating online about the issues to try and spread awareness. It could be signing petitions and going to protests. But there is always something we can do, and I really do think that we have to.