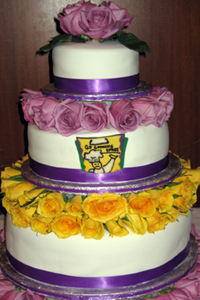 Last week I got an e-mail invitation (special thanks to Dr. Lydia Shrier!) to an iron-chef style cooking competition at the Back Bay Events Center. It didn’t take long for me to decide that of course, I had to go. (Really, all I needed to know is that it was going to involve tasting lots of food, and I was sold!) So this past Saturday night I attended the event, which was dubbed the “Gluten-Free Cooking Spree”, and was hosted by the National Foundation for Celiac Awareness.

I had heard of Celiac disease before – a good friend of mine was diagnosed after years and years of severe stomach problems, but before Saturday I didn’t know much at all about a gluten-free diet, and I don’t think I ever connected the two. Little did I know, it turns out that having Celiac and living a gluten-free lifestyle go hand in hand. (A gluten-free diet means avoiding all foods that contain wheat, rye, and barley. People with Celiac can also be sensitive to oats.)

Before I tell you all about the event, here are a few facts about Celiac disease, courtesy of the NFCA website: celiaccentral.org

Okay, and now the fun part. I had such a great time at the event! Not only did I get to watch teams of doctors and chefs cook up super snazzy dishes for a panel of judges to taste, I got to sample everything that they made, as well as dozens of other dishes and samples of gluten-free foods. There were fish dishes, noodle dishes, pizza, chicken, veggies, pretzles, crackers, and my personal favorite- the sweets. I have a terrible sweet tooth, so as soon as I was done eating I made a beeline for the dessert table. There were cookies, donuts, sorbets, gorgeous cakes, and a chocolate fountain complete with marshmallows, and strawberries on sticks for dipping! Deeeelish! I am totally sold on gluten-free food, everything was so yummy- you would never know that it was prepared differently than other food.

Aside from the fantastic time I had tasting all of the food, it was enriching to learn more about a disease that I had only heard of a few times before. I met Celiac patients who, like my friend, had been living with the disease for years before they were diagnosed, and listened to speakers talk about the disease. A doctor spoke about some promising studies regarding a possible medication for celiac patients, and pharmaceutical reps were there with more information for anyone who wanted it.

I can safely say it was a wonderful night for all who attended, and if you ever have the chance to go to a “Gluten-Free Cooking Spree” – don’t pass it up!