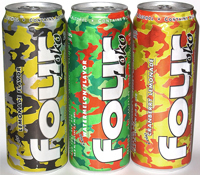 By now, many of you have probably heard the buzz about the caffeinated alcoholic drink called Four Loko. Four Loko is made with guarana, taurine, caffeine, and alcohol. It sells for less than three dollars a can. There‘s been a lot of press about this drink recently because nine students from Central Washington University were hospitalized after consuming it. All nine of these students’ blood alcohol levels ranged between .12 and .35 percent. This is dangerous considering that a blood alcohol level of .3 percent is considered lethal. Four Loko responded to the negative press, stating that their company was not to blame, and that the drink isn’t intended for anyone under the legal drinking age. They also defended their case by saying that the college students may have been drinking other alcoholic beverages that could have contributed to the alcohol poisoning.

Although this may be true, I still feel like the company that makes Four Loko targets college students. Four Loko appeals to young people because of the colorful label, sweet taste, and cheap price for a quick buzz. However, the reality is that just one 24 ounce can will put you over the legal blood alcohol limit. One can of Four Loko can contain up to 12.5% alcohol, which is the equivalent of approximately 3-4 beers. In addition, the caffeine in the drink can prevent you from realizing how much alcohol you’ve had and how drunk you really are. Like they say, sometimes you pay for doing things the cheap way.

The Food and Drug Administration has been investigating whether Four Loko and other drinks combining alcohol and caffeine are safe. They’ve asked manufacturers to provide concrete evidence to show that these drinks are not harmful, and if they fail to do so the product will be banned. The truth is, we don’t know how long that will take. So in the meantime, please, be careful! It’s best to avoid consuming these drinks until the FDA finishes their investigation! If you decide to try one, remember, just because you don’t feel drunk that doesn’t mean you aren’t, it’s just the caffeine keeping you alert. Stay safe!