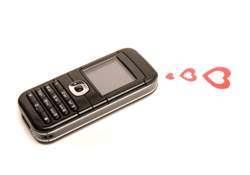 So many things in our world are changing due to technological advancements. Paper mail has now become a novelty – a hobby for some. Even books are digital now! As far as advancements that have changed the way people communicate, cell phones certainly stand out. In fact, cell phones have even changed the way people date. Now, when you meet someone, you probably text them before having a phone conversation. It isn’t uncommon to date someone for weeks on end without ever talking on the phone.

It’s true that texting is advantageous because it allows you to send a message that can be read (and answered) at any time, and allows people to be reached when they are on the go. However, for all the ways that texting makes communication easier, I feel that in regard to dating and relationships, texting (although trendy), isn’t the best thing to do. I fear that a good phone conversation with your significant other will eventually be a thing of the past. In fact, getting to know someone through phone conversations seems to be dead already.

Instead of text messaging being a casual method of communication, a whole texting culture has evolved to the point where it’s “rude” to let a text go unanswered for more than five minutes! People also attach emotional meaning to texting behavior, sometimes to the point where “who” does or doesn’t initiate the text conversation is often a point of contention. People also try to be humorous and sarcastic through texts – bad idea – humor and sarcasm aren’t necessarily understood this way. It seems that most people have forgotten the art of a good conversation filled with actual human voices. Now I know that the thought of a phone conversation with the person you are interested in can be quite stressful, so here are a few tips to get you through:

If you can master the art of a good phone conversation, you may find that you can get to know someone much on a much deeper level than you would if you were just texting. Some may even say you learn more about a person talking to them on the phone than in person, because you only focus on their tone of voice and what they say rather than the way they look.