Being a Polite Customer 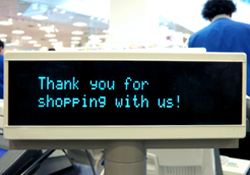 Have you ever walked into a store and witnessed a customer yelling at a sales clerk? Do you think that yelling does any good? I don’t. I think being nice and calm helps you get a better result.

A couple of weeks ago, I went to the Apple store to get my iPod checked because the battery wasn’t lasting. The sales clerk was a really nice young lady. She took my iPod and ran some tests. It turned out that my iPod’s battery wasn’t working well, and unfortunately my warranty had just expired 12 days before. Obviously I was upset, because if I’d brought it to the store just 12 days earlier, my iPod would have been replaced at no charge, but I also understood that it wasn’t the clerk’s fault. She told me that perhaps restoring the iPod could make the battery last a little longer and asked if I wanted to have it restored at the store. I said yes and thanked her for her help.

I left, and while my iPod was being restored, I went to get my eyebrows done. I went back to the Apple store about 10-15 minutes later. The sales clerk who had been helping me earlier walked towards me with a smile. She told me that because my warranty had only been expired for about two weeks, they would replace my iPod at no cost and would give me an additional 90-day warranty. I smiled and thanked her once again.

Now, do you think I would have received a new iPod if I started yelling and screaming and making demands? I definitely don’t think so. I learned from my own experience that having a good attitude will probably help you, and even if it doesn’t, you shouldn’t take your anger out on an employee. At the end of the day, they aren’t the manufacturers, so they’re not the ones to blame.