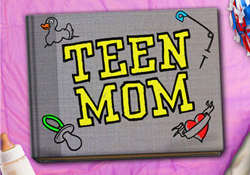 Have you ever seen MTV’s show Teen Mom? If you haven’t, you’re missing out big time. This show looks into the lives of teenage girls between the ages of 16 and 18 who have gotten pregnant and now have to deal with school, becoming an adult at an early age, and learning how to take care of a child as a single parent or with a boyfriend. Having a reality show like this on TV is an eye opener for young girls who are having unprotected sex, because it shows how much work and dedication it takes to care for a newborn baby at such as young age. Most of the teens on the show haven’t finished high school and their chances of going to college are slim because all of their time and money goes towards diapers, bills, and other necessities.

The first time I watched this show I thought it would be just another show about baby momma and baby daddy drama. However, it’s actually really interesting to see the struggles these people go through and how much they grow throughout the season. I have a feeling that there are people watching this show who think that they are different; that they won’t get pregnant because they’re more careful and responsible. The truth is though, the experiences of the girls on Teen Mom are real, and accidents can happen, so it’s better to be on the safe side and always have safe sex. Aside from preventing an unplanned pregnancy, using condoms will also protect you from sexually transmitted diseases. So, use protection, because when the reality of being a parent hits you, and your future career plans and dreams are changed forever, there’s no turning back.