What Were They Thinking? Lingerie for Little Girls 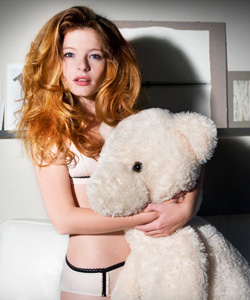 First of all, why do four year old girls need to walk around in lingerie? The pictures on the website make it seem like little girls just hang out in their underwear. Twelve year olds might start wearing training bras, but they certainly shouldn’t be taking pictures or exposing themselves publicly. I think the entire idea of this lingerie line is ridiculous. If you look at the pictures on the site, you’ll be even more shocked – innocent little girls pictured in their bras and panties, hair teased, posing and giving seductive looks. We see this all the time in advertisements – because sex sells.

If it’s wrong for older women to be portrayed as vulnerable objects (and it is), why would it be okay for little girls to be portrayed like this? It’s like telling them that it’s okay to take pictures while sitting on their couch with just underwear on and their legs wide open. What reason do young girls need to wear lingerie? Little girls are not supposed to be showing their underwear to ANYONE, so why do they need sexy underwear at all? What happened to cartoon or days of the week underwear?