The Embarrassing Hat: An Adventure In Sun Protection 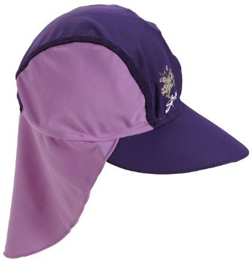 When I was in elementary school my mom would make me wear a Hat. Capital H. This wasn’t your classic Red Sox baseball cap. No, this Hat was bright purple with a streak of gold down the middle, made of bathing suit spandex with a bill in the front, and (I still shudder to think of it) a hanging flap in the back to cover my neck. It was enough to make any seven-year-old want to stay in for recess. My mom would tell me that all the kids in Australia were wearing those types of hats, and I would crassly remind her that we were in America.

But in the end, the floppy hat won. There wasn’t any way around it, really. I would come home from school with my scalp bright red and my nose peeling, and my mom would know immediately that I had defied her. So I learned. A half hour of humiliation during recess was preferable to my mother’s ire – as well as the blistering sunburns that could last for days.

I was always jealous of my friends with darker skin, or the ones who could develop a tan from a nice day in the sun, whereas the same amount of exposure would leave me looking like a lobster. Now I know that in some ways, I was lucky. My pale skin allowed for some awful sunburns, which were kind of like nature’s (embarrassing) reminders to lotion up. To most people, sun damage doesn’t appear as visibly as it does on me, but that doesn’t mean it’s not there.

A tan is a lot more pleasing to the eye than a burn, but it can still lead to serious skin damage later on in life. Sun protection is especially important in people under the age of 18. A recent study by Yuming Guo and Michael G. Kimlin found that sun exposure in young people can be far more detrimental than in adults. The reason is that children are born with delicate skin that strengthens as they age. Although skin ages naturally, and both wrinkles and damage are inevitable, early sun exposure can accelerate the development of wrinkles and cause leathery skin and even lead to cancer. One of the biggest dangers is that many of the harmful effects of sun exposure don’t physically manifest until years after exposure. That’s what can make sun damage such a sneaky enemy – the time when our skin looks its best is when we are accumulating the most sun damage.

That damage isn’t limited to superficial effects such as wrinkles. Too much sun exposure can lead to a whole host of skin cancers. Many of the cancers occur on the surface of the skin and are treatable, but one form, melanoma, can be deadly if not caught early enough. Cancer is certainly a heavy price to pay for carefree fun in the sun, which is why it’s so important to protect your skin from harmful UV rays. An Australian study found that sunscreen use can reduce the risk of invasive melanoma by 73%. With that statistic, I can forgive Australia for making those goofy hats. Australia has, in fact, been supporting a “no hat, no play” campaign among its youth, and it seems to be working. The country, known for its beaches and sunshine, is the first in the world to see rates of skin cancer fall.

There’s no reason to avoid those golden rays. As long as you slap on some sunscreen (and reapply!) and top it off with a hat and some shades, you should be safe to play. And don’t worry – there are plenty of trendy hats out there.