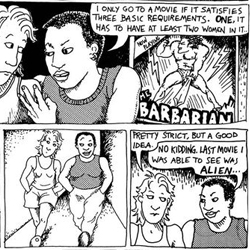 There’s nothing I love more than escaping to the movies on a sticky summer day to beat the heat. Getting caught up in a story in an air-conditioned room with a bucket of popcorn is my kind of afternoon. Whether it’s a comedy, drama, or quiet indie movie, I’m sitting in the center row, paying rapt attention to the action on the screen. However, when it’s time to choose what movie to see, I have a hard time. Sexism has been widespread in Hollywood since the advent of film, but it seems like as I get older, my tolerance for offensively written, one-dimensional women has gone down. Because of my own discomfort for the mainstream media’s issues with women, I’ve started to think of movies in terms of the Bechdel Test.

Created by cartoonist, graphic artist, and author, Alison Bechdel, the Bechdel Test is a barometer of sexism in film. To pass the test, the movie must have at least two female characters with names, who speak with each other about something other than men. While at first glance it might seem like this would be an easy test to pass, I’m sure you would be surprised. Avatar? Nope. Django Unchained? Failed. The entire Lord of the Rings series? Doesn’t pass either.

It’s not so much that these individual movies don’t pass the test that frustrates me, but the larger implications that the failures point out. It seems as if the entertainment industry not only feeds into, but also contributes to stereotypes about women being too uninteresting, weak, and oblivious to anything but romance to do anything of importance in movies. While we all know that this is intellectually untrue, when these dismissive stereotypes are nearly all we see in Hollywood blockbusters, it can be hard to remain convinced.

I don’t know about you, but I’m pretty bored of seeing women so wholly unlike myself on screen, if they appear at all. Now that I know about the Bechdel Test, I’ve come to understand just why this is: I’d like to see well-rounded female characters at the forefront of a story.

Because its summertime and tons of films are coming out (big blockbusters among them), treat yourself to an afternoon at the movies. I challenge you, though, to ask yourself the following questions:

If you can find a flick that meets the criteria, e-mail me at cywh@childrens.harvard.edu.