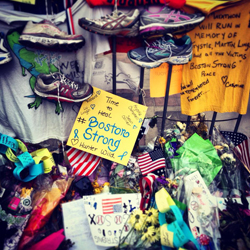 Yesterday, Boston celebrated the 118th Boston Marathon, marking a little over a year since the tragic Boston Marathon bombings. For the first time in 31 years, an American (Meb Keflezighi) won the race, finishing with a record time of 2:08:37, the second fastest time in the race’s history for an American. Nearly 36,000 people (about 9,000 more than usual) participated in yesterday’s race, running to honor the four people who lost their lives and the 264 others who sustained serious injuries last year.

However, yesterday wasn’t about breaking records or winning the race, it was a day of empowerment and pride throughout the city of Boston. Everyone — from the runners and the police force to the loved ones supporting the runners and the spectators cheering them on — exemplified that Boston is now stronger and prouder than ever. The events of that unforgettable day last April left a permanent mark on many individuals and on this city, changing the way people will celebrate the years of tradition the cherished Boston Marathon have provided. It was an event that could have put an end to the tradition of the marathon because of a sense of fear, but instead it did the exact opposite. Life in Boston has gone on, and there’s an even stronger sense of community, but those affected by the tragic events of last year’s marathon will never be forgotten.

I was lucky enough to watch some of the marathon yesterday, celebrating the triumph and the strength of both the runners and of this city. Security was much tighter than in previous years, especially in popular areas along the 26.2 mile route. I spent part of the day in Kenmore Square where I went through three security check points, getting my small purse checked and tagged three times. No backpacks or rucksacks were allowed at any point throughout the race. Large flags or signs were also banned from marathon venues. Unregistered runners and cyclists intending to jump into the race weren’t permitted this year. The police doubled the number of officers on patrol from last year, with 3,500 scattered among the crowd and they were aided by 100 additional security cameras and bomb-sniffing dogs. These security measures were absolutely necessary and not bothersome at all.

I don’t know if it was the thousands of supporters I saw wearing yellow and blue Boston Strong t-shirts, cheering on the runners; or if it was the story I read about a runner that fell during the race and was unable to finish so other runners stopped to help him, carrying him across the finish line; or if it was the extremely friendly but also vigilant police force; or if it was the determined runners who high-fived spectators along the way and crossed the finish line with pride; or maybe it was just a combination of all of these things that culminated in an extreme sense of joy and pride within me. This year the Boston marathon was bigger than a marathon. It showed that the city of Boston could bounce back stronger and prouder than ever. Yesterday’s marathon was a prime example of what it means to be Boston Strong and I’m so proud to call this city my home.