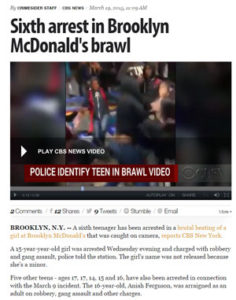 I recently watched a video about a girl who was severely beaten by five girls at the same time at a fast food restaurant in Brooklyn, New York. I was extremely shocked and couldn’t help but say “oh my gosh is this real?!” I couldn’t imagine the amount of pain she felt during and after the fight. After the first couple of seconds I couldn’t stand to watch any longer. There is no amount of words in this world that can describe how hard it was to watch that video. I couldn’t help but wonder why didn’t anyone help her? Why didn’t anyone try to call for help or at least try to stop the fight? All I can think about is where are her parents?

I know that stepping into a fight or trying to break one up is beyond hard. I personally talk my friends out of fighting; I always let them know that even after you’re done fighting you won’t feel satisfied so there’s no real reason to fight anyone. I don’t believe in fighting. I believe if you and an individual have a problem you should try and talk it out and try to let it go. If you see someone getting seriously hurt you shouldn’t just stand there and watch, you should try and stop it. Being a bystander is nothing to be proud of; you can still get into a lot of trouble for just standing there and watching the situation happen. No one should ever get that hurt over a little problem that can be fixed. Helping someone out when there in a situation like the Brooklyn teen doesn’t make you a “loser” or a “punk.” You’re doing the right thing and no matter what others say just know that what you did helped someone. Most people wouldn’t stop a fight because of many reasons like getting hit or causing problems for you. I think another way to help the individual is to call for help whether it’s their parent or a teacher or even the police. Never just stand there and watch someone get hurt!

Nothing is worst then seeing someone so hurt and knowing that you didn’t do anything to help. Don’t be a bystander; even if you’re afraid to say something you can always leave an anonymous letter or phone call to an adult. If you witness a fight or see someone get hurt and decide not to say anything, just keep in mind that if this person was your little brother or sister or even a close friend or cousin you would want someone to speak up and say something.

Tagged with: Bullying, The Bystander Effect