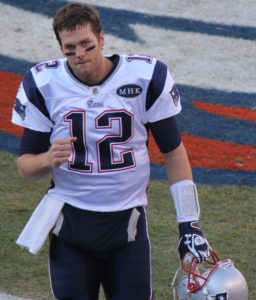 As the story goes; January 7th, 2015 at 6:40pm was the kick off that would go on to become the game that led the New England Patriots to defeat the Indianapolis Colts 45-7 and ultimately push the Pats to the 2015 NFL Super bowl, where they became the XLIX Super Bowl Champions. That wasn’t the only excitement that resulted from this game though; it also sparked “Deflate- Gate.”

Since January, you’ve probably seen “Deflate-Gate” all over the media, from accusations to claims and even funny confessions. It has been seemingly difficult to avoid. The Great Deflate-Gate debate- Did it really happen intentionally? Did Tom Brady know? Is Tom Brady’s punishment fair? If you have somehow missed out on the Deflate-Gate updates, sit back as I tell you my side of the story. Keep in mind though, this is coming from a Boston teen who may or may not have a slight bias that the New England Patriots are the best team in the league led by one of the greatest quarterbacks to ever put on a jersey. You can agree or agree to disagree but here is a possible scientific explanation you may not have considered.

I would like you to  consider the physics behind it all. I am not a physicist but I do have evidence from one. The claim was that 11 out of 12 balls were underinflated by 2 psi (pounds per square inch) but the numbers all fit together when you consider not only the cold temperatures, but also the rainy conditions. According to Robert F. Sekerka, PhD, “there will be a drop in pressure of about 0.3-0.5 psi for every 9 degrees F (Fahrenheit) drop in temperature.” Thus, with an initial temperature of 71 degrees F and a final temperature of about 41 degrees F or a temperature drop of 36 degrees F, there is approximately a 1.2psi drop in pressure (36/9=4 and 0.3 X 4=1.2). Now before we get ahead of ourselves and say it doesn’t add up, you can’t forget about the rain. Sekerka also said “Experiments on 12 footballs by Tom Healy, a Carnegie Mellon University mechanical engineering graduate student, showed that if the football leather is wet, the pressure drops by about another 0.8 psi.” There you have it, 2psi (1.2+0.8= 2). The numbers can prove it and science can prove it. The question is, can you believe it?

Almost 5 months later and “Deflate-Gate” is still in the news. We may never know the exact truth despite all the science and evidence supporting both sides. It is however more likely than not that the Patriots would have defeated the Colts either way simply based on the great deficit with the final score being 45-7. Perhaps it was just a great media story to keep the tabloids busy during the week break in between The AFC Championship and the Super Bowl that I, like so many others were sucked into and continue to follow. Food for thought.