Gun Violence and its Aftermath: #WeAreOrlando 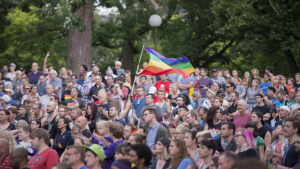 #WeAreOrlando has been a trending hashtag on social media for over a week as people across the world stand in solidarity with the victims of the worst mass shooting in American history that happened in Orlando, Florida on June 13, 2016. A gunman killed 49 people and dozens more were wounded and hospitalized. My initial reaction to this news was, terrifyingly, a lack of surprise. I was then immensely sad for the lives that were lost. The realization that shook me to my core was that shootings have become something that seemed normal. A common occurrence. I have been desensitized to violence, along with many others in America where shootings are frequent. In 2015, there were 372 mass shootings in America. A mass shooting is defined as an incident where at least four people are killed or wounded. 372 mass shootings a year is more than one every day of the year. I had to let that sink in. (You can see a map of shootings across America here:  http://www.pbs.org/newshour/rundown/heres-a-map-of-all-the-mass-shootings-in-2015/).

Is there so much gun violence, real and make-believe, on our televisions that we’ve just stopped caring? Has real life just become too much like a first-person video game that we have stopped distinguishing between reality and video games? I hope not. Research has shown that young people exposed to gun violence experience lasting emotional scars. Some children may develop posttraumatic stress disorder (PTSD), which can affect brain development. The psychological trauma of gun violence may lead some people to arm themselves “for protection,” or desensitize them so that they feel less hesitation about engaging in violent acts.

I agree that gun violence in Orlando is a different kind of monster because it combines the shock of a violent act with the possibility of it being classified as a hate crime, especially since it happened in a gay club during Pride Month. The LGBTQ community suffered losses, and after the shooting, many local gay and bisexual men wanted to give blood to help the victims—but they couldn’t. An old Food and Drug Administration (FDA) policy states that any man who has had intercourse with another man in the past year is legally banned from giving blood. It was an experience that combined oppression and rejection of the LGBTQ with emotional loss.

This mix of sorrow and frustration has been in my heart all week, so I looked for ways to get involved in making a change, both in gun violence and by supporting the victims of the shooting and the LGBTQ community. It is easy to feel downtrodden as if everything is out of your control, but here are some options to change that: