Reflecting on the First Day of High School 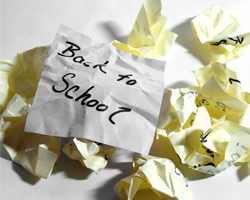 Recently, I started my first day of high school. A lot of people build up the first day to be the most intimidating thing. I went from a tiny middle school to this giant high school and was expecting to not know where anything was. I also was panicking because I knew ninth grade would have higher expectations than eighth, and I wasn’t sure how I would do at taking on that challenge. The one thing that kept me calm was that my best friend is actually at my new school, so I have someone to talk to or at least go to when I don’t know what I’m doing.

I have to take the bus to school, which is not something I’ve had to do before. My friend and I took the bus together and we talked the whole way there about how we thought the first day would turn out. When we entered the school, everyone was hugging and saying hi and I was awkwardly standing there and holding onto my friend’s bag through the crowd of people. I hate crowds so I was really awkwardly standing around my friend who was probably annoyed by me holding onto her the whole morning. I started to calm down when we all were waiting for the first bell to ring. When my friend and I had to separate, I didn’t want to go to class. When I did, I awkwardly stood at the door because I had no idea where to sit. I sat in the way back. My teacher seemed friendly so I was a little calm. My classmates barely talked, but when they did, they seemed really nice.

Movies make high school seem cool and glamorous. But from what I’ve seen, that’s not true. Everyone seems so friendly. Although a lot of them might not laugh when I make a weird joke, they aren’t rude. My teachers seemed really nice and not scary or mean. My math teacher had a lot of energy, and my history teacher made jokes the whole time. They told us about the high expectations for their school and I was kind of worried because I came from a school where I didn’t have too much work or high expectations. While getting from class to class I was freaking out because I had no idea where to go. But it wasn’t that hard to find my classrooms after I asked someone.

After E.L.A, math and history came lunch. During lunch, I was expecting my friend to be there because we had lunch at the same time. But, she was in a completely different building for lunch than I was. I had no idea where to sit. I started panicking because the lunch monitors told me I had to sit down. I was freaking out and ran to the bathroom and stayed there the whole time during lunch, trying to text my friend to ask where she was. Now, we stay in a classroom for lunch together with her friends that I sometimes talked to. Although I haven’t really made any friends, I still talk to people at lunch and in classes sometimes during group work. Next I had biology. The teacher seemed fun, but said we would have homework every single night, which I’m not looking forward to. My last class was French. Everyone apparently hates the French teacher, but I actually really liked her. She was strict, but she made us laugh a lot.

Overall, my first day wasn’t really what I expected. I expected strict teachers and work harder than I could take. I haven’t been in school too long, but so far the work has not been as hard as I expected. There was a lot of homework the past few days. I didn’t think I could do this every night. It was really stressful for me to do it because I had little free time those nights. Even though there are a lot of challenges for me, I’m still only getting used to it.

Tagged with: Back to School, High School