Could it be a Concussion? 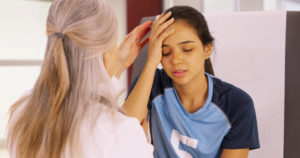 If you’ve ever watched a sporting event, chances are you’ve seen players wipe out, collide, tackle, and impact one another- it is often just the nature of the games. For example you might be watching your school’s football team and see a player get tackled. He’s not unconscious but you overhear that he is complaining of feeling dizzy and having a bad headache. Could this athlete have a concussion?

Sometimes it’s hard to know if you (or someone you see get hurt) might have a concussion because the symptoms vary and sometimes they don’t develop right away. Also, most of the time people who have concussions do not lose consciousness (blacked out/knocked out). In fact, only 10% of concussions involve loss of consciousness.

What is a concussion?

A concussion results from a blow or jolt to the head, neck, face, or body. Although the brain is protected by the skull and something called cerebrospinal fluid, the sudden force of an impact can affect normal brain function. The most common symptoms include physical (e.g., headache), cognitive (e.g., feeling distracted or forgetful), emotional (e.g., feeling sad or anxious), vestibular (e.g., off balance) or sleep related difficulties.

What should you do if you see someone fall, hit their head, or take a direct blow to the body that jolts their head?

Ask them if they’re okay and find out if they remember what happened. If the person is alert, you could say that “the impact may have caused a concussion,” that they “may need medical attention,” and offer to call their parent or guardian. If the person is unconscious and appears to be alone, you should tell an adult, call an ambulance, and make sure that they get medical attention right away.