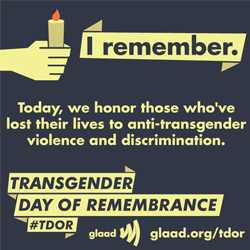 Last week was “Transgender Awareness Week”. “Transgender Day of Remembrance” was held in Boston on Sunday, November 17th, 2013. “Transgender” is a word for people whose gender identity is different than their biological sex, (the sex they were assigned at birth based on physical characteristics). This term includes a wide variety of people who may transition from one gender to another OR express their gender outside traditional gender roles of male and female. By comparison, someone who identifies as the gender they were assigned at birth would be called “cis-gender.”

Some transgender people choose to take hormones or have surgery to change their anatomy to better fit their identity as male (sometimes called female-to-male, or FTM) or female (male-to-female, or MTF). However, these services are expensive and usually aren’t covered by health insurance. Others choose to live as the opposite gender without altering their body in any way. Being transgender has to do with a person’s gender identity and gender expression, and it is unrelated to sexual orientation; a transgender person’s sexual orientation can be straight, gay, lesbian, or bisexual. Young people may know at a very early age that they don’t identify as the sex they were assigned at birth, while other transgender people recognize their true gender identity later in life. Basically no two transgender people will have the exact same experiences – some journeys are more challenging than others, but whatever gender a person identifies as is valid and deserves respect.

Some facts on Transgender Youth:

Ways you can support Transgender adolescents and adults:

Too often bullying and trans-phobic language go unreported, but sticking up for someone can make all the difference in the world, both for that person and others who have endured the same unfair treatment.

Many of the things cis-gender people take for granted (from having access to public bathrooms consistent with one’s gender identity, to being welcome in classrooms and student housing on campus, to receiving appropriate health care from skilled medical providers) can be a daily battle for transgender and gender non-conforming people. The possibility of rejection by someone’s family when they come out puts transgender youth at greater risk for homelessness – the rate of housing instability is estimated at 20% – but most shelters are segregated by biological sex, regardless of the individual’s gender identity. Homeless transgender youth are often not accepted by some agencies that serve their LGB peers.

You and your friends can make a difference and help create a safe world for transgender people by:

There are some amazing transgender people in the world today (Laverne Cox, Kye Allums, Lana Wachowski and Kit Yan to name just a few) and plenty more who haven’t come out yet. Just imagine what it would be like if everyone felt supported and accepted; think of all the great things we’d get to do! It’s important for us to take care of each other, so let’s be sure that our schools, jobs, homes and communities are inclusive and safe for people of all genders!