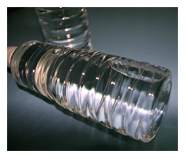 I’m sure you’ve been told to “drink eight 8 oz. glasses of water every day” thousands of times, but has anyone ever told you to be aware of the amount of water that you’re drinking? What happens if you drink too much water? After reading an article about a 28 year old woman who died last year because of it, I felt it was important to share what I learned.

This shocking death was the result of a clever radio show contest called “Hold your Wee for a Wii” in which the contestant who could drink the most water without going to the bathroom would win a Nintento Wii. Sounds harmless right? Actually, this can be very dangerous and can even cause death. The thing that shocked me most about the article was that a nurse called into the station during the contest and told the hosts, “I want to say that those people drinking all that water can get sick and die from water intoxication,” but the radio hosts ignored her warning.

After drinking almost two gallons of water without going to the bathroom, a 28 year old woman (who was one of two people left in the competition) started feeling sick and complaining that her head hurt. Sadly, despite feeling sick (and because she didn’t know about water intoxication), she went home and was found unconscious, five hours later.

I’ve heard about water intoxication in athletes who do extended physical activity for over four hours because they don’t replace salts lost in sweat, but I have never heard that just drinking large quantities of water could have the same effect. The reason water intoxication can occur is that when you drink large quantities of water without replacing salt, the fluid outside of your cells is diluted, and the water moves into your cells causing them to swell. This leads to swelling of the brain cells, which can cause symptoms such as headaches, dizziness, nausea, seizures, comas, and even death. When exercising for extended periods of time, sports drinks such as Gatorade can replenish electrolytes in the fluid in order to prevent too much water from moving into the cells. So while it is very important to prevent dehydration by drinking plenty of water when exercising, be aware that water intoxication exists. If you start getting a headache or feeling nauseous during exercise, you should tell someone immediately.