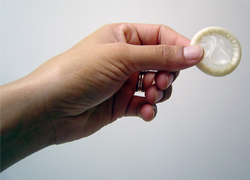 So as I was walking to the train on my way to school one morning, I grabbed a Metro Daily Newspaper. As I was reading, I came across an article about the debate regarding whether or not condoms should be given out at local public high schools. This topic is very controversial, and some may think it will promote sexual intercourse among young people. I feel that regardless of whether or not schools give out condoms, there will still be a percentage of students who are sexually active. I don’t think that giving out condoms at school will necessarily push those who aren’t yet engaging in sexual activity to start, and as a positive, it will promote safe sex for those who are.

The newspaper article also shared a shocking and scary statistic; in recent years there have been 1,430 new cases of chlamydia among Boston teens aged 13-19. Chlamydia is contracted during unsafe sex, and if schools give out condoms to promote practicing safe sex, this statistic could improve over time. So I don’t see the negative effects of giving condoms at school. It’s important that if teens are having sexual intercourse that they do it safely; and according to the article, many Boston teens are. Fifty-four percent of Boston Public School students reported having had sex in 2009.

Condoms may be expensive for teens, especially if they don’t have a job, and some people may feel embarrassed to have to buy condoms in a store. They may feel like they are being judged by the store clerk because of their age. In my opinion, offering them at school just makes the situation more comfortable for those who don’t have easy access to them otherwise.

Helping to protect teens against the consequences of unsafe sex should be a priority. I think the plan to have access to condoms in schools should be implemented, because, as I said before, there will be students having sex. Making condoms readily available to them will only help them be safer.