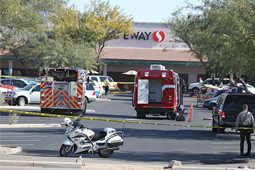 The most talked about topic on the news recently has been the tragedy in Tucson, Arizona. If you haven’t heard about it, on Saturday, January 8, 2011 a 22 year old male opened gun-fire in parking lot. The result of this senseless act ended with the death of 6 innocent people, wounded 14, and left congress woman Gabrielle Giffords in the hospital fighting for survival. The victims ranged in age from 9 to 79 years old.

I feel extremely sorry and my condolences go out to the families of the victims and people who have been affected by this massacre. However, I know this may sound crazy, but I also feel sorry for the alleged suspect. Many people who have spoken out about the crime have said that there were plenty of warning signs. Commentators say that this act of violence was allegedly premeditated. So think about it… In some ways, this crime may have been preventable had the young man just received some help. Obviously there was something wrong with the assailant. Anybody who could find it in themselves to commit such a crime needs help. I’m not saying that this justifies his actions (because there was definitely no excuse for these senseless killings), but I do feel as though some sort of intervention could have prevented this from happening. I’ve read that there were things that this man had done in the past to scare people, such as getting kicked out of school for being a threat to others. According to the media, he also posted videos on YouTube that specifically targeted the United States government.

So if all this was happening, why didn’t somebody intervene and try to help him? In my opinion, he needed the help of a medical professional. Maybe this man could have found another way to release his emotions. Why were all the warning signs ignored? How was this man able to purchase a gun anyway? I feel sorry that such a mentally unstable individual wasn’t given the attention and aid that was necessary to help stop him from committing such a horrific crime. Even more passionately, I feel sorry for the victims. I just like to think about both sides of the story.