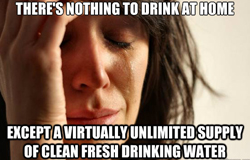 Are you familiar with twitter trends? If you are then you must have heard about #firstworldproblems. The trend consists of a lot of tweets with complaints about trivial things such as what show to watch, cell phone battery’s running low, not knowing what to eat, etc.

There’s a video called Empathy and Perspectives: First World Problems, in which a young Haitian girl says “I hate when I leave my clothes in the washer so long they start to smell” while in front of a family washing clothes in the river; and a Haitian man says “I hate it when my house is so big, I need two wireless routers” while in front of small, wrecked house. I think the point of the video is to illustrate how irrelevant our problems are when compared to the problems of third world countries. However, I don’t think that’s the message we’re getting from the trending tweets. On Twitter, people just complain about a lot of things and don’t really mention how small and insignificant our problems are compared to “real problems” such as not having water, food, clothes, and shelter. I don’t necessarily see these tweets as doing something wrong, though.

When my phone dies, I tend to feel like it’s the end of the world and I’m sure a lot of people feel this way too. Of course I know that there are other major problems such as people not having food on their plates, or any phone at all, but it doesn’t mean that my phone dying isn’t a problem for me. I think relatively speaking our complaints are minor, but, like an article I read on the Huffington Post says, we don’t choose what world we come into.

It’s not my fault that I was born in the United States and that someone else was born in the Dominican Republic or Haiti. It’s not my fault I always have running water and electricity and they don’t. Because of cultural differences what we label as “problem” and/or the value we place on things is going to be different. Now, if you asked me if I thought we should focus on finding solutions to bigger problems, I would say, “of course”, but again, that doesn’t stop the first world problems from being problems. They’re still problems – very small and often with easy solutions compared to bigger problems – but still problems nonetheless.

To me, the Empathy and Perspectives video is a good idea just because it makes things relative and compares first world problems to third world problems, and really does emphasize how silly our problems seem next to bigger ones. The trending tweets, on the other hand, aren’t really effective ways to shed light on the issue at hand. They don’t really put anything into perspective, it’s just people venting and complaining about the 101 little issues they come across on a daily basis. We need to do something to fix these third world issues, and the solution is very far from a tweet or even millions of tweets. Can you think of an effective way to shed light on these issues?