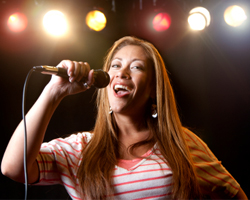 I admit: I have HUGE stage fright. Even the thought of doing anything in front of an audience (whether in front of hundreds or less than ten) makes me tremble. So I guess you could say I placed myself in the wrong situation when I decided to try out to sing the national anthem at my high school’s pep rally. Just like you see in all the cool high school television shows and movies, pep rallies are full of energy, lively colors, and pumped up teens showing pride in their school! Even though I was terribly nervous, I went into the audition with an amazing mindset. I just wanted to show my peers that I have more talent than they perceive. I felt like I had never really done anything extraordinary to separate myself from the norm, and this was my opportunity to do it.

Sitting in the wooden chairs in the auditorium gave me a chilly feeling, and hearing everyone else perform well made the feeling even stronger. There was even a point where I almost backed out and left. I was repeating “I don’t want to do this…” over and over in my mind. However, my name was called, and it was too late to retreat. I had to get up. I had to walk up the stairs and onto the stage. I had to sing in front of EVERYONE. I still don’t know why, but a small crowd was forming in the back, hiding behind the stairs so that the judges wouldn’t boot them out. Why did everyone want to hear me sing?

The first note flew out of my mouth and I just ran with it. My voice was practically shaking by the fifth line. I even stopped at one point during the performance, but I persevered. I’d just accomplished what I never though I’d even attempt.

The worst part was over. As I was walking back to my seat, I wanted to break down and cry. Just replaying my audition over in my head assured me that me and singing are not compatible, but others thought the complete opposite. People were informing me that I did well! I could sing! No matter what the results of who would get chosen to sing the national anthem, I was my own winner.